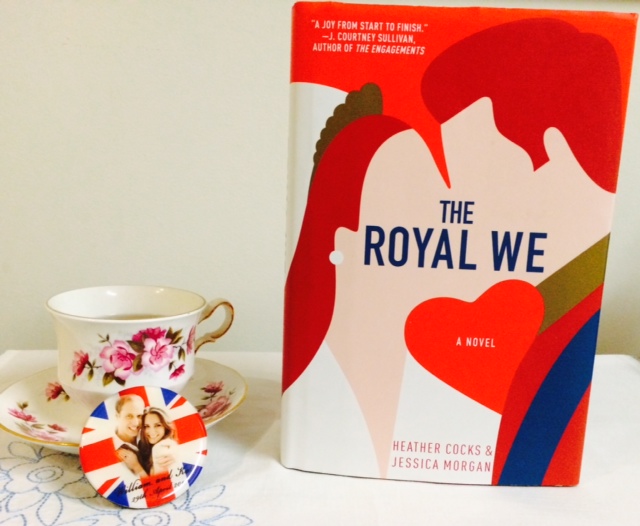 Some might say I’m a bit of a royal enthusiast. Like any sane person, I woke up at 3 a.m. on April 29, 2011, made my tray of tea and shortbread and watched the hours of pre-ceremony activity leading up to the wedding of the century. I have the Kate and William paper dolls (don’t act like you don’t), piles of magazines with their faces on them (no tabloids—only legitimate ones, for historic preservation purposes), and sure, on occasion, I still throw on my Royal Wedding t-shirt when I’m going to bed. I love me some Kate and Wills, so naturally, I was a little excited when Heather Cocks and Jessica Morgan, creators of the beyond amazing gofugyourself, released The Royal We—a novel about two crazy kids who fall in love in college and have to deal with the pesky issue of one of them being the future king of England. I was even more excited when it turned out to be one of the most delightful books I’ve ever read.

The Royal We tells the story of Bex Porter, an American girl who heads to Oxford to study abroad and finds her life irrevocably changed when she befriends—and naturally falls in love with—Prince Nicholas of Wales. The novel follows the ups and downs through the years of their relationship, and it’s not so much a tale of will-they-or-won’t-they—the book starts out on the eve of their wedding—but more a matter of how on earth do they? From stalkerazzi reporting their every move to royal relatives who don’t approve of commoners (let alone American commoners), Nick and Bex find their relationship and sanity tested at every turn, shining a less than glorious light on what our favorite blue bloods must endure.

Now, you may be thinking, How many “average girl falls for a prince” stories does the world need? Trust me—if the world only had room for one, this would be it. (But seriously, the more the merrier. It’s a story that will never get old. Just ask the Hallmark channel.) The Royal We doesn’t focus on the dream of shiny gowns and gorgeous palaces—those are not Bex’s bag. Instead, this novel breaks it down to two people who love each other but face crippling obstacles. That’s a story I will devour every time.

While Will and Kate are clearly the inspiration for the story (a fact that the authors openly embrace, especially in the form of the charming, ginger-haired “spare,” Freddie), the characters here are completely their own people. Bex and Nick are lovable, smart, flawed, sympathetic and original. Their friends, family, even their frenemies are so realistically drawn that I wouldn’t be surprised if I opened People tomorrow and saw them at a polo match.  (Except for Nick. He’s not a fan of polo. It’s all in the book.) I was so obsessed by every page of this book that I pretty much had it surgically attached to my hands for two full days, refusing to put it down until I finished. So if I’ve had any conversations with you recently that didn’t make any sense—I probably wasn’t listening to you. I was probably reading, or, at the very least, thinking about this book.

Okay. Or maybe having a daydream about Freddie. That guy is a firecracker.

If you love the royals, you will love this book. If you don’t care a whit for them (blasphemy!), you will still love this book. At its core, it’s a story about two people who love each other and have to figure out if that’s enough. It’s creative, heartwarming, and just plain addictive. And if none of that sells you? Read it for Freddie. The ginger-haired spare needs your love.

One thought on “The Royal We: Everything I Love in One Pretty Package”