Fellow Droughtlander survivors, we’ve made it! Season 2 of Outlander finally premieres this Saturday which means that we can finally stop grilling our Pocket Jamies about where they’ve been for ten months.

In honor of Outlander week, I’ve been reliving my favorite moments all of the moments of season one. I’ve been swooning over Jamie, giving the evil eye to Laoghaire, and thanking my lucky stars that I was born in the day and age of hand sanitizer. And, of course, I’ve been cheering every second for Lady Broch Tuarach herself, Claire Fraser, because she’s pretty much the toughest, smartest, most butt-kicking heroine around and I love everything about her—especially the fact that she can’t seem to keep her mouth shut ever.

One of Claire’s key—and most beloved—character traits is that it is physically impossible for her to conceal her emotions. (Which is why it’s so hilarious that the MacKenzies mistake her for a spy for so long. Claire would literally be the worst spy ever.) She is firm in her beliefs of what’s right and wrong and feels compelled to speak out about it at every turn, even if it gets her into hot water. If we wanted to make a list of all of the times she’s refused to hold her tongue, we’d be here all day, so here is an abbreviated list of the top 12 times she put the sass in Sassenach. (This list is in chronological order because it’s impossible to rank Claire’s awesomeness.)

1. When Claire Meets the MacKenzies 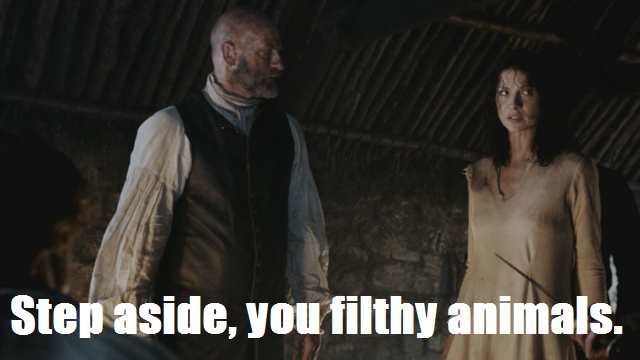 If I found myself in a strange place and time (even if I didn’t understand what was happening yet), I would probably keep as mum as possible until I at least knew where I stood or who these bloody men surrounding me were. And you can tell Claire thinks that’s a good idea too. Until the men think they’re capable of setting their clansman’s dislocated shoulder and she’s like, “WHAAAAAAAAAAAAAT.” She immediately starts shouting orders and dropping medical jargon and all of the highlanders are like, “Er…whosiwhatsitnow?” But honestly, I can’t say I blame her. I’d want to touch Jamie right away too.

2. When Claire Catches Dougal Spying on Her 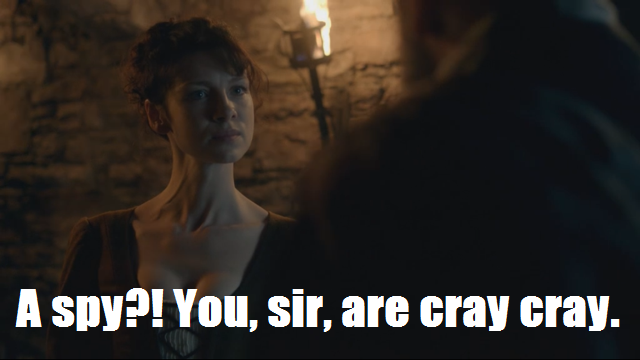 You’d think if you were brought to this castle with a bunch of people who are already suspicious of you because you’re English, are using words like “disinfect,” and are basically wearing your undergarments, you’d try to blend in. Not Claire. When she finds out that Dougal is having her followed by Rupert and Angus, instead of trying her best to come off as innocent, she confronts Dougal like, “How dare you, sir?” And Dougal is totally thinking, “This is why I stay away from the English.”

When you give Claire some Rhenish, she gets gabbier than my old Chatty Patty doll. Everyone at Castle Leoch is trying to listen to the singing storyteller and she decides it’s a great time to play Hello, Dolly! to Jamie and Laoghaire. She’s like, “Doesn’t Laoghaire look so pretty, Jamie? You guys have so much in common! How’d y’all meet?” You’re fooling no one, Claire. You doth protest way too much. We all know how much you love changing Jamie’s bandages. The only thing that’s not clear is why everyone in the Great Hall isn’t shushing you right now because Gwillyn the singing storyteller is the hottest act of the century.

4. When Claire Takes Down Father Bain 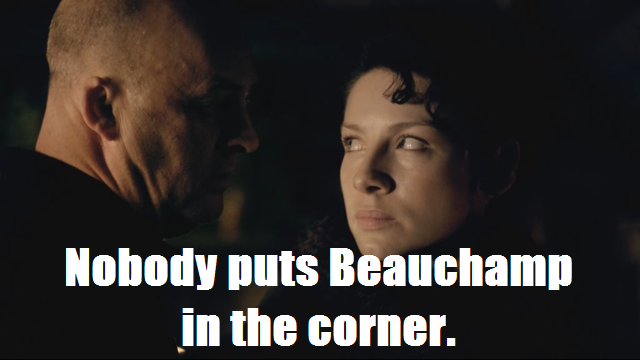 Claire’s outspoken behavior is almost always warranted, but when it comes to Father Bain, it’s super duper warranted. She’s like, “I know how to save this little boy!” and he’s like, “Shut up, woman! I’m a man of the cloth! Be gone with ye and yer devil’s work,” and she’s like, “Ohhh, no you didn’t.” The good news: She saves the boy’s life. The bad news: She makes one heck of an enemy. That dude is spite-ful.

5. When Claire Wants to Return that Goat

The 1700s, man. You can’t pay the rent, you give your laird a goat. That works, right? Well, not if you need that goat for milk and you have a baby crying. But don’t worry. You won’t have to make things awkward and ask for it back. Claire will take care of that for you. Because JUSTICE.

When Claire finds out that Dougal and his men are Jacobites raising money for Bonnie Prince Charlie, she could keep quiet, let them do their thing, and not draw any attention to herself. Or she could tell Ned Gowan that they’re making a huge mistake, that they’ll never beat the English army and that they should stop right now because it’s a lost cause. That won’t raise any suspicion, now, will it?

7. When Claire Loves the Scots 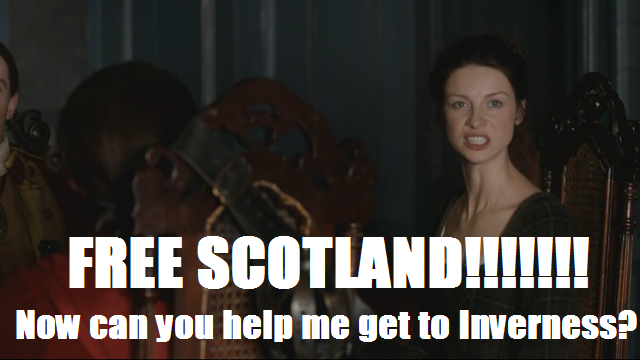 I’m all for speaking out in the name of justice, but if I were being detained by a bunch of redcoats and they seemed to be buying what I was saying and were going to help me get home, I probably wouldn’t start going into a spiel about how the English should leave the Scots and their land alone. But, you know, I’m not Claire. She must defend the Scots! 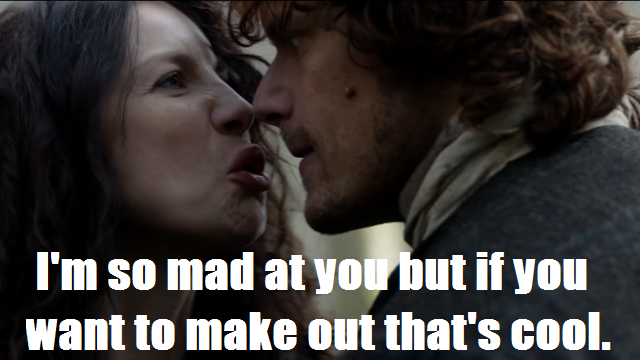 Oh, Jamie. We know husbanding is hard. When you save your wife from Black Jack’s clutches, you probably shouldn’t point out how she wouldn’t have gotten into that position if she’d stayed put like you ordered. Ordered? Claire does not take orders. And if you suggest that she should, she might just spit in your face, slap you and call you a few swear words not fit for a lady. But hey, she does not take orders.

9. When Claire is Bad at Witch Trialing

Let’s be real: there probably weren’t many exonerations during witch trials. Still, if you’re being accused of witchcraft, it’s probably not in your best interest to stand up there and shout back at every charge leveled against you even as your lawyer is like, “Please shut up and let me do my thing.” But you don’t besmirch the name of Claire Fraser and think you’re going to get away with it!

Claire doesn’t really get that whole “My husband is the Laird of Lallybroch” thing right away. The minute she gets to Jamie’s home, she’s arguing with him in front of the servants and telling him to apologize to his sister like he’s five. Does he deserve it? Yuppers. But Jamie doesna like being told what to do in public. In private though? Totally okay. Because he’s enlightened.

11. When Claire Confesses to that Monk

No one ever said it was easy carrying around this secret that you’re from 200 years in the future. When that monk asks, “Would you like me to hear your confession?” he has no idea what he’s about to get into. She can’t stop confessing. And confessing. And confessing. But it feels so good to get it off of her chest! And he takes it all in stride. (Take note, Father Bain. This is how a man of the cloth should be.)

12. When Claire Won’t Let Jamie Give Up

I have so many favorite Claires, but the Claire who brings Jamie back from the brink of death has got to be at the top of my list. Her man has been broken beyond all belief, but if you think she’s going to sit in the corner idly by and watch him fester away into a pool of infection and depression, you don’t know Claire Fraser. She will not let Black Jack take her Jamie away. And, on behalf of all of us who love Jamie Fraser desperately, all I can say is THANK GOD FOR YOU, CLAIRE.

With so many sassy Claires to choose from, I’m sure I left some of her best moments out. Do you have a favorite incident where Claire couldn’t keep her mouth shut? And how excited are you for all of the sassy moments ahead in season two?

It it Saturday yet???