At the risk of repeating myself, I have to ask: Is this season of Outlander knocking it out of the shinty field or what?! I cannae even watch without crying my guts out, and the long burn of Jamie and Claire’s separation has paid off like a pot of Jacobite gold. I’ll even let the serious lack of JAMMF in “Freedom and Whisky” slide because the episode is just that good. The only drawback? We have to wait until October 22 for the next episode! 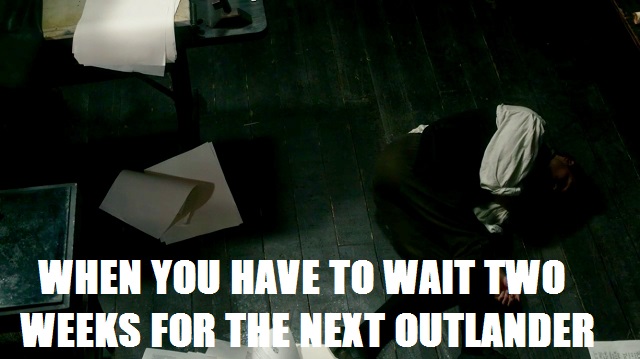 There’s a lot to talk about, so let’s not dilly dally. Here’s my take on all the sob-worthy, heart-racing, and downright adorkable moments in this week’s Outlander Superlatives.

How do you survive a nearly JAMMF-less episode? With a major dose of Roger, that’s how!

Seriously, I love Roger Wakefield. Not only does he make a grand gesture of showing up in Boston, he shows up in style. After a long flight, I look like…well, sort of like Jamie as Dunbonnet living in his cave for six years. Roger looks like this: 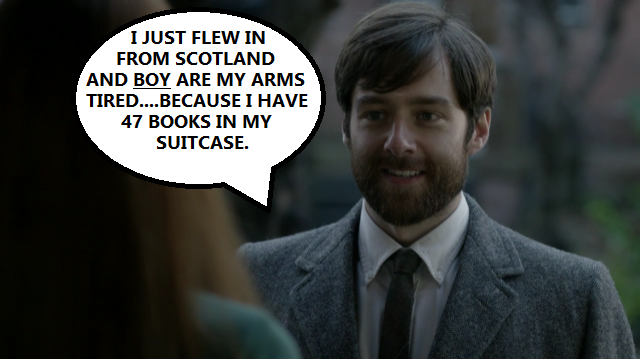 But he hasn’t just come to drop that bombshell. He also wants an American Christmas with Boston cream pie and a lobster roll! And he also wants to catch up on Dark Shadows. Roger loves his daytime soaps. He’d probably also love a good cup of New England clam chowder, but after catching Claire and Bree mid-fight, he probably doesn’t want to push it. 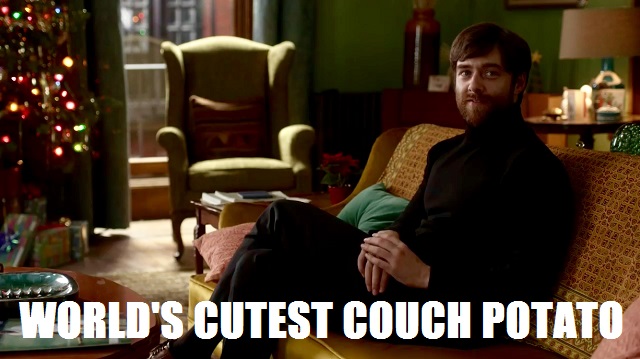 And speaking of moments of tension, Roger is a great person to have on hand when you need to take a breather. Why? Because he somehow always shows up with a bottle of whisky and would love to pour you a dram. 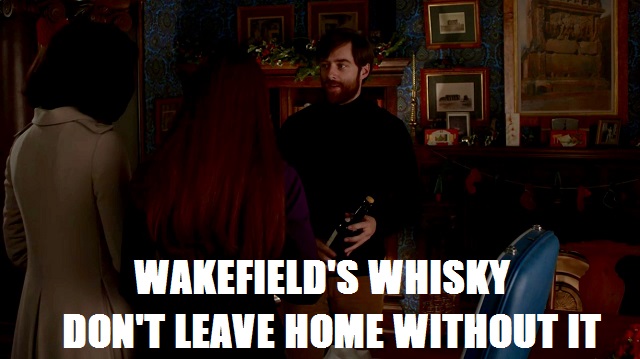 But my favorite thing about Roger is hands down his gift for gift-giving. HE GIVES EVERYONE BOOKS. I LOVE BOOKS.

Roger, you’re officially invited to all of my Christmases ever.

The Real Star of the Show: Brianna’s Wardrobe

Bree may be flunking out of Harvard, but at least she is looking fab while she does it. Has she been dealing with the Maury Povich “Frank is NOT your father” news with retail therapy? Because I’m not going to lie. This is something I can support.

First, she’s got this adorable little plaid skirt on, which may not be the Fraser tartan, but they probably didn’t have that pattern at Contempo Casuals or wherever the cool kids shop in 1968.

She’s also got this TIMELESS bag. And anyone who knows me knows I LOVE A GOOD BAG. 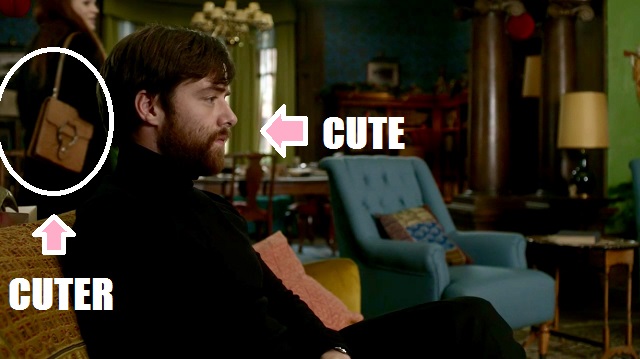 And any Boston girl will tell you how important a chunky sweater is, and Bree’s sweater game is ON POINT. I would wear this sweater tomorrow. Actually, I think I have this sweater in my bureau.

But not all of her looks can be timeless. Sometimes a girl needs something that is quintessentially of her time, and this fierce number is perrrrrrrrrfect for strutting around Cambridge in 1968.

And I’ve saved the best for last. This watch. It perfectly matches her sweater and it’s also my favorite color. Do you think Bree would agree to be my best friend and loan some of these items to me? Because I neeeeeeed this watch.

Cutest of the Cute: Roger and Bree

I’m sorry, but I just can’t get enough of these two. THEY’RE TOO CUTE. Look how cute they are watching Dark Shadows!

And look how cute she is giving him his lobster roll and Boston cream pie, even though she’s just sent her mother 200 years into the past!

AND LOOK AT THEM READING AND EATING LOBSTER ROLLS.

I have to move on. There’s just too much cuteness here.

P.S. Those purple tights are AMAZING, Bree. Add those to the list of items I need to borrow. 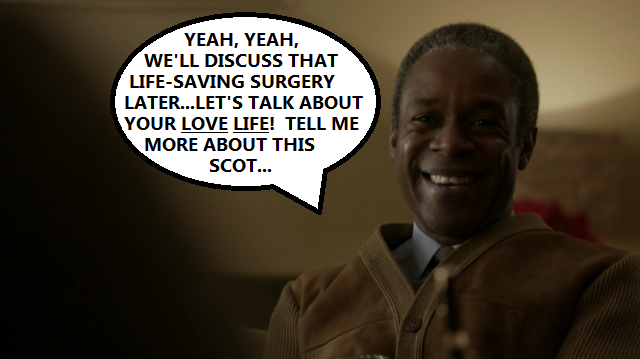 If they hadn’t performed major surgery at the top of the episode, I’d wonder if Claire and Joe do anything medical at all or if they just hang out in their office looking fabulous and talking about Claire’s love life. They’re giving off a major Sex and the City vibe, and Joe is clearly the Charlotte. Everyone needs a Charlotte.

Come ON, Sandy Candy. I thought we were done with you! I get it. You and Frank were in love. You went to see every movie that came out in 1956 together. Blah blah blah. But Claire was his wife. And I don’t know what Frank told you, but it definitely wasn’t a matter of Claire “not letting him go.” He didn’t even ask for a divorce until the day he died, so…get off your high horse and go back to your self-important research on whatever the heck it is you’re researching. PS. Claire saves LIVES. 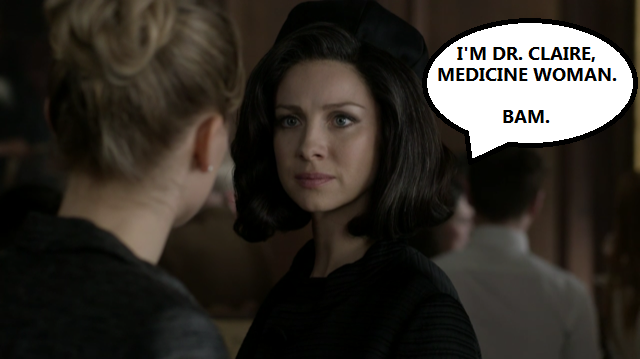 I love that when they’re performing surgery, all of the male doctors are like, “Dr. Claire! You must close her up!” and Claire is like, “Gentlemen, go eat some soup. I know what I’m doing.” And she does, because not only is she the best surgeon around (sorry, Joe), but once you’ve operated with no real medical supplies in the 18th century, an actual hospital with real scalpels and whatnot has got to be a cakewalk. 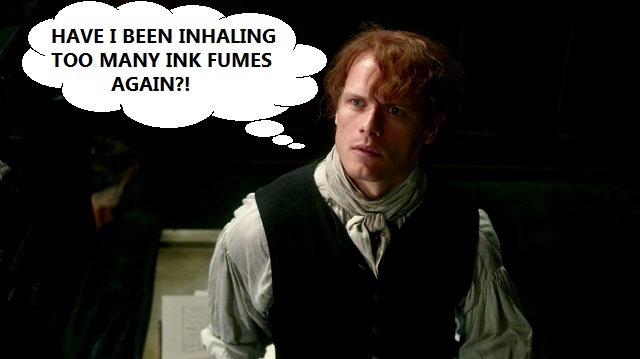 Can you imagine not seeing your JAMMF for twenty years and discovering that he hasn’t aged a day? I know that Claire is too preoccupied with her own appearance to stop and consider if Jamie has changed, but imagine if she made her fancy dress and used her Miss Clairol only to find that he was still rocking the Dunbonnet look? I mean, it’s Jamie, and even at his worst Jamie is looking better than any human ever should, but Print Shop JAMMF with his little ponytail and his vest? Mama Claire must have been on Santa’s nice list!

I don’t know about you, but I’m pretty sure this was my EXACT expression watching Claire walk into that print shop. 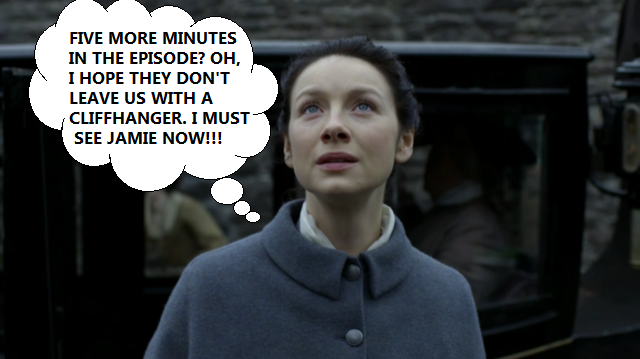 And my exact train of thought as well. 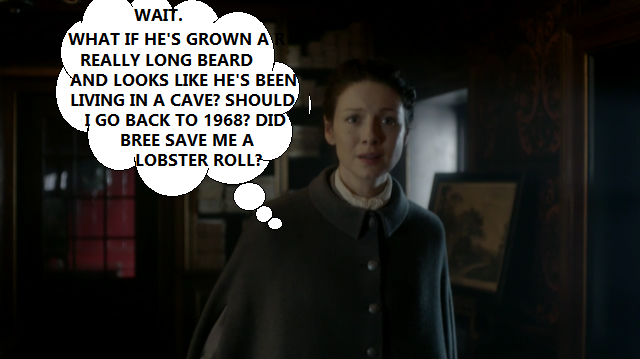 So, fellow Fraser fanatics, what did you think of “Freedom and Whisky”? Did you have enough Kleenex on hand? Did you want to faint like Jamie when you realized there’s no new episode this weekend? DO YOU WANT ALL ROGER ALL THE TIME? Let’s discuss and hold ourselves over until we get to Episode 306, “A. Malcom.”