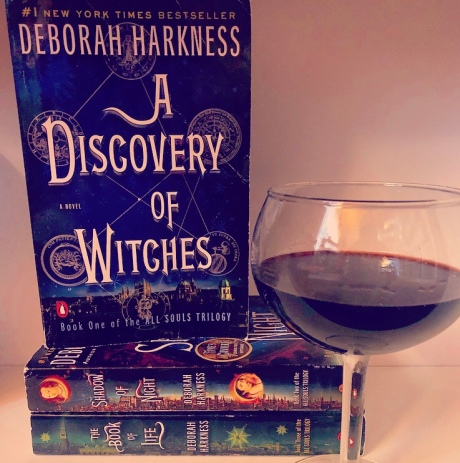 As I was getting off of the train last week, an icy cold rush bore into the back of my neck, and naturally my first thought was:

It’s been a while since we’ve bestowed this title, but fictional dreamboats will never go out of style, no matter how long they’ve been around. And this hottie has been around for a long, looong time. But for someone who is almost 2000 years old, Matthew looks pretty good, wouldn’t you say?

There is so much to love about this old soul. To begin with, he’s brilliant, and I know–I know–anyone who has been around for a couple of millennia would probably have plenty of time to brush up on anything they have a remote interest in, but Matthew is special. He’s a geneticist, an esteemed Oxford professor, has more degrees than he knows what to do with, and has the world’s deepest knowledge of wine. He can tell you anything you want to know about Shakespeare, Darwin, Christopher Marlowe, or Elizabeth I because he knew them all personally. He can build anything because he was a carpenter and he can speak just about any language because why not? He’s valiant, chivalrous, and can strike a yoga pose as well as he can tango.

In short, he’s everything. (Except short. This wearh is a tall, gorgeous drink of water.)

The thing I love most about Matthew, though, is his vulnerability. Sure, he may appear mad, bad, and dangerous to know, but underneath he’s got eons of pain, grief, and guilt that he’ll never be able to shake. He carries the weight of every sin he’s committed, century after century, and he does it all with a healthy dose of Catholic guilt. Those he cares for, he cares for deeply, whether it be his family, his best friend, or one very smarty pants historian of alchemy. He puts everything on the line for them, out of duty, out of honor, and out of love–and boy, does he know how to love.

How can you help but fall for a man who appreciates a strong, fiercely intelligent woman, who knows everything about everything, who appreciates the finest things in life, and who looks mighty gorgeous  while doing it? Call him a prince, an assassin, a spy, a doctor, or a knight, there’s really only one word to describe Matthew: mesmerizing.

What’s just as hot as Matthew on the page? Matthew on the screen! Matthew Goode is incandescent as Matthew Clairmont in the PERFECTLY ADAPTED A Discovery of Witches TV series, streaming on Sundance Now and Shudder and now airing on AMC!

2 thoughts on “Literary Hunk of May: Matthew Clairmont”