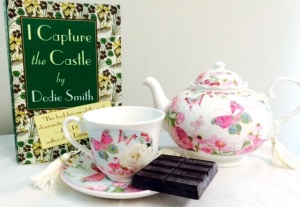 In going through our recent Literary Hunks of the Month, I made a discovery: a lot of our dreamboats this year have been, well, somewhat questionable characters. (Although I prefer to think of them as misunderstood and in need of hugs.) But what about those guys who are truly good, through and through? Don’t they deserve a little love? That’s why I’m wrapping up the summer with the sweetest of sweet boys, Stephen Colly from the Dodie Smith classic I Capture the Castle.

How can you not be head-over-heels in love with Stephen Colly? (Perhaps the bigger question is: How can Cassandra not be head over heels in love with Stephen Colly? Really, Cassandra. Really.) He is thoroughly, entirely wonderful. If you’ve read I Capture the Castle, I’m sure you I don’t need to elaborate, but in case you haven’t or just need a refresher, let me tell you why he’s the best.

For starters, he’s beautiful. I know, I know, looks aren’t what matters, but he’s gorgeous and noble-looking, and that deserves some props. He becomes a model and they want to put him in the movies. A lot of guys who look that good would just skate off of that and not even try to be anything more, but Stephen doesn’t even know he’s good-looking. He’s all humble and insecure and “who, me?”—which makes him all the more adorable. Despite all of that, his beauty isn’t even what’s attractive about Stephen. It’s his heart. Good God does he have a heart.

Here’s the kind of guy Stephen Colly is: Stephen is the kind of guy who will make sure you have hot water for your bath even if that means he has to spend all day pumping water into the cistern and stoking the copper, whatever that entails. (Castle life can be rough, y’all.) He’s the kind of guy who will spend his hard-earned money on a chocolate bar for you because he knows you like to eat chocolate and read in the tub. He’ll light a candle for you when you get wrapped up in your book because he doesn’t want you to ruin your eyes, and he’ll write you love poems and slide them under your door as a little surprise. (Okay. Maybe he doesn’t actually write the poems. Maybe he copies famous poems and signs his name to them, hoping you won’t notice, but the thought is there.) He’s the kind of guy who will drop everything to come rescue you in the middle of the night when you run off with your dog and forget your wallet, and best of all, he’s the guy who will work his tail off and use his last dime to buy you a wireless radio for your birthday because he knows you like to listen to music in the tub (Do a lot of his gestures involve bath time? Sure. But the man knows you love a good soak.)

Oh, and if you need further evidence of Stephen’s dreaminess? He’s played by Henry “Superman” Cavill in the perfectly perfect 2003 film adaptation, and he looks like this:

I Capture the Castle is a beautiful novel filled with great characters who all seem to be in love with the wrong person. I love it for that, but I do have to admit that, on occasion, I find it a bit far-fetched. Because honestly, how can everyone who crosses his path not be totally obsessed with Stephen Colly?

Miss any of our previous Literary Hunks of the Month? Good guys or scoundrels, you can find them all here.

Who’s your favorite fictional dreamboat? Leave a comment or let me know on Facebook and Twitter. Who knows? He may just be one of our upcoming featured crushes!