THE FINAL FOUR ARE HERE! 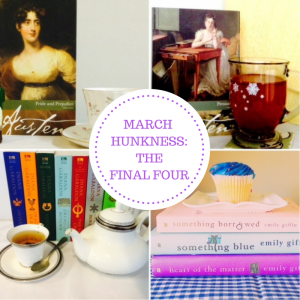 After two weeks and three rounds of March Hunkness competition, your votes have separated the hunky from the SUPER HUNKY, and now it’s time for our four remaining literary dreamboats to duke it out–dazzling head to dazzling head.

(Full disclosure: I find all of our competitors super hunky, and I’m still reeling a little bit that JAMMF the Champ was knocked out in round one, but hey, it’s a democracy here. That’s why we draw the matchups out of my dog’s hat.)

The four men still in contention could not be more different. We’ve got a modern-day lawyer, a naval captain with an affinity for writing letters, a singing historian, and a super rich dude with a pretty sweet house. Who will be crowned this year’s Champion of Hunks? Only time–and your votes–will tell!

Voting in round four closes Tuesday, March 27, at 6:00 p.m. (ET). You can vote as many times as you’d like to ensure that your favorite fictional boyfriends make it to the championship match and have a chance at being named Book Perfume’s 2018 Champion of Hunks. WHO WILL IT BE?

Happy voting, friends. You’ve got some tough choices ahead of you. I’ll just be over here eating cookies and watching the numbers roll in.

One thought on “March Hunkness 2018: The Final Four”