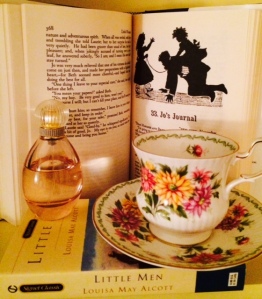 Let’s be honest with ourselves for a minute. If you’re a warm-blooded book lover with a beating heart, you’ve had a crush on a literary character or two.

Or twelve. Or two hundred forty-seven.

They may be dirk-carrying heroes in kilts (you know who you are, JAMMF) or they may be middle-aged men with crazy wives locked up in top wing of the house—but we love them. We’ve dreamt about them, swooned over their pledges of devotion and forgiven them for their sometimes reprehensible behavior. (Honestly, Darcy, what was with that first proposal?) They’ve given us hours—sometimes years–of fangirlish pleasure, so it’s only fair that we give them something in return.

Every month, we will honor these fine creatures by celebrating a different hero hunk of the page. (Hey, the rogues and rascals need love too.) Since September reminds us all of back-to-school, there is really no better choice for our first Book Perfume Hunk of the Month than the dreamiest teacher you could ever imagine.

Now let’s get real. If you love Little Women, you’ve had the Team Laurie versus Team Bhaer debate. Maybe you’ve felt conflicted yourself. For those of us who read Little Women as young girls, Laurie may have seemed like the obvious choice. The boy next door. Young, playful. Heroine Jo’s BFF. Heck, in the 1994 movie, he was played by Christian Bale. Laurie was the perfect girlhood crush, but Bhaer—Bhaer is who we want as women.

From the outset, our Bhaer is just a freaking diamond. The first moment Jo sees him, he’s carrying a coal bucket up the stairs for a young servant girl because her little back is too young for such heaviness. The next time she sees him, he’s arranging his books. Arranging his books! Can’t you just see him alphabetizing, organizing by subject, wishing cell phones had been invented so he could snap a picture and put it on Instagram?  It’s pretty clear that Jo should make her move and lock it down, but instead she wants to write to her family about how he has the kindest eyes she’s ever seen while harping on the fact that he’s nearly forty and his clothes are threadbare. It’s called denial, Jo. We’ve all been there. But the guy is darning his own socks in the 1800s and not asking a woman to do it, so he’s not going to be on the market forever.

As if we need any more evidence of Bhaer’s awesomeness, he supports Jo’s mind and has intellectual discussions with her. He “inadvertently” helps her with her writing by pointing out that the kind of sensationalist stories she’s penning under a pseudonym are not worthy of a true writer. He respects her mind, independence, and passions for teaching and writing. Again, in the 1800s. Put a ring on it, Jo.

Refraining from any spoilers for those who haven’t read the book (in which case, what are you doing with yourself? Go out and read Little Women!), let’s just say that Professor Bhaer is a dream for us girls who spend way too much time in our heads. He’s the kind of guy who will share his umbrella—shabby as it may be—in a rainstorm. The kind of guy who will wear a paper soldier hat that his pupil made him. The kind of guy whose pockets may always be empty, but who will always have something to give.

Essentially, he’s the reason we’re weak in the knees for those penniless, intellectual types.

It’s hard to imagine Little Women without him, but Louisa May Alcott created Professor Bhaer only after her publisher urged her to give readers a love interest for Jo. Louisa, not wanting to conform to a typical fairy tale ending, came back with the bearded academic with questionable table manners and a funny little accent. She may have thought she was pulling one over on everyone, but in the end, she gave us—and Jo—the perfect Prince Charming we didn’t know we were looking for.

Do you have a favorite Professor Bhaer moment? Are you more Team Laurie? Share your thoughts below!

Looking for a great movie version? Gabriel Byrne’s Bhaer in the 1994 adaptation is perfection, and Rossano Brazzi’s turn as the professor in the 1949 release is one not to miss as well. 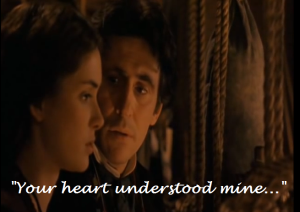